In Memory of Bill Gass 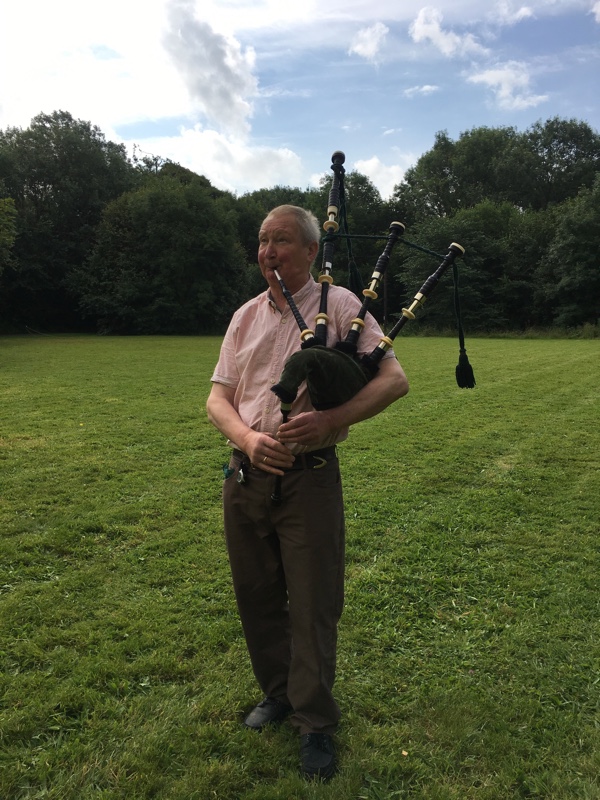 Bill playing on the morning of his marriage to Andrea Blyth in July 2017.

Today the 25th. of March 2019 was the bittersweet occasion of Bill Gass’s Funeral. His coffin was piped to the Crematorium by Julian Smart playing the tune The Kilworth Hills a 3/4 march.  Jules also played The Wandering Piper at the Committal. Members of the Swansea Pipe Band formed a guard of honour and members of his Welsh Choir sang a Welsh Hymn during the service. (Although not a Welsh Speaker, Bill had such a good ear and voice that he could sing along with the choir.) Afterwards Jules played one of Bill’s favourite slow airs, Flight of the Eaglets.

For me personally it was farewell to a dear friend who, sadly, I got to know well only during his latter years when he was troubled with his health. Bill would try to improve my piping and introduced me to Pibroch. After a session of tuition we would have lunch in a variety of establishments. As his health issues became more complex the tuition fell by the wayside and our lunches and meetings revolved around hospital visiting, clinic appointments and MRI investigations.

When I first joined the Bristol Band, as a complete novice, the repertoire was contained in a “magic folder” that was often referred to and seldom seen. I eventually tracked it down and found it to be a bundle of deshevelled photocopies. Many were hand written and it even contained 4 different versions of The Rowan Tree. In those days accomplished pipers seemed to need little in the way of music scores but as a pedantic learner I needed something more concrete. I therefore pestered Bill to draw up the band repertoire and to approve the setting of all the tunes – some 44 in total. You will find the initials BG in the bottom right hand corner of nearly all the band tunes, dating their approval by him. Little did I know that Bill did not always play the tune the same way twice! His initials often appear more than once as the tune was later modified.

Julian Smart gave the eulogy at the funeral and I am grateful that I may reproduce that here as it beautifully summarises the great loss to piping of Bill Gass’s passing.

I first met Bill in 1977, I was 11 years old. Bill offered me tuition and I started making the trip to Bath every Saturday morning. Little did I know then, just how long this relationship would last and how much of a profound effect Bill’s influence would be on my life. Bill tutored many people over the years and he never charged anyone a single penny, he just wanted to pass on the skill in the spirit in which he had obtained it himself.

We were all incredibly lucky that he gave up so much of his time for us. Bill was an excellent tutor, He never gave false praise, and if I had played badly, he had no qualms in saying “Jules that was a complete load of **** ”. But when praise was deserved, he gave it in bucket loads.

His love though was solo piping and in particular Pibroch, and he excelled at it, winning many competitions during the 1980’s. Bill’s highest accolade was winning a silver medal at Oban. He then went on to compete in the gold medal for a couple of years before retiring from competing.

This gave Bill time to focus on the other hobby that he was both passionate about and also excellent at – “Having Fun”. We must have played at hundreds of gigs over the years, and gone on dozens of overseas trips with various bands and groups, whoever would have us. And I am witness to the fact that fun was had  –  pints and pints of it.

Bill had qualified as a naval architect and worked for the MOD in a number of locations including Bath and latterly Bristol. Although a civilian, he held the rank of Civilian Naval Commander. In the early 1990’s Bill teamed up with Cmdr Campbell De Burgh (also of Naval Architecture) and together they started the Royal Naval Piping Society. Bill was the musical director and Campbell the secretary. The object was to help and bring together pipers throughout the Royal Navy. The society was a great success, during his time in this role Bill was given the honour of being the Lone Piper on the battlements of Edinburgh Castle for the Edinburgh Tattoo.

By the mid 1990’s Jimmie MacQueen had moved to Bristol and had the idea of starting the City of Bristol Pipe band, it took Jimmie some time to convince us but eventually Bill and I agreed. Bill was instrumental in getting the band started, his name put credibility to the band and drew pipers and drummers in to join. He played in and supported the band for around 15yrs, tutoring lots of the pipers.

Bill will be greatly missed throughout the piping community.

Many people in the band will have their own favourite memories of Bill. I am happy to add some here. 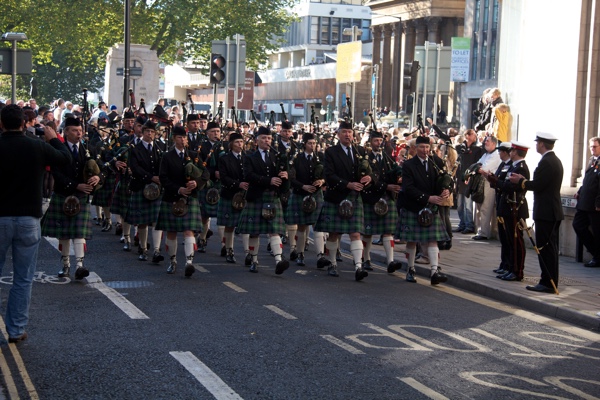 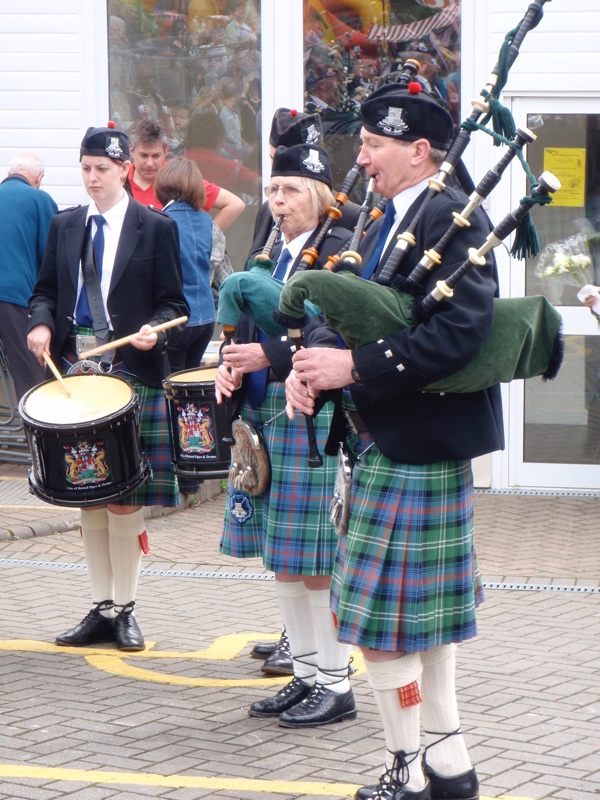 Playing in the circle at Winterbourne 2008 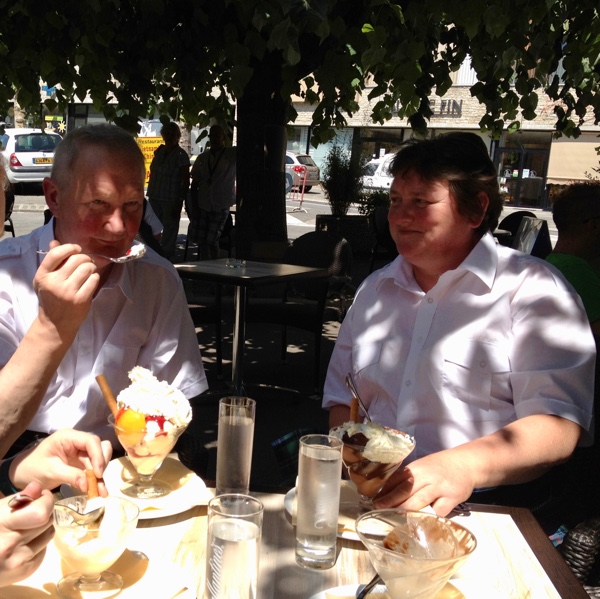 Bill and Andrea on Bristol Band French Trip taking a break on a hot day!